Air and Its Relations to Life: Being, with some additions, the substance of a course of lectures delivered in the Summer of 1874 at the Royal Institution of Great Britain.

Although very much may be done by constituted authorities to promote the public health by making and enforcing sanitary regulations, it is unlikely that the desired results can be fully attained before some degree of knowledge of first principles is made to pervade even the poorest sections of society. Sanitary reformers have, of course, various influences to combat. Some of them, indeed, belong to people who, from their position, ought rather to aid than to resist such a cause. But, after all, ignorance is one of the most formidable obstacles that are met with, and if every member of the community could be made to understand the danger of neglecting sanitary laws, and the nature of the simple methods y which they may be obeyed, it is quite certain that the returns of death and disease would be very materially altered. Books such as that now before us are well calculated to meet the requirements to a very large extent.
Mr. Hartley has treated his subject, necessarily, from a scientific point of view, but he has brought it fully within the range of unscientific readers to understand, and he has condensed it within such a compass as to tax as lightly as possible the patience of the most serious objector to scientific treatises. The whole is comprised in five short chapters, of which about one-half is devoted to a consideration of the physical and chemical properties of the atmosphere and its constituents. The remainder has more immediate reference to the subject of ventilation, the origin of minute organism in the air, and it other impurities, together with allusions to various incidental topics allied to these. The importance of a general understanding of such matters cannot well be overestimated.

Air once breathed is unfit to sustain life. Air, in its natural state, contains about three parts of carbonic acid in ten thousand. If that quantity be doubled, the air becomes sufficiently impure to disqualify it for use. The amount of air given off by a healthy man in an hour is from six to seven tenths of a cubic foot, about the same that would be produced by two good candles, while a good gas-burner will yield in the same time about six cubic feet. For equal illuminating power, however, candles yield a larger amount of impurity than pure gas would do. From this it is clear that a man seated in a room with two lighted candles would require 6,000 cubic feet of air in an hour, in order to keep the atmosphere from becoming uncomfortably vitiated. In rooms properly constructed this is attained, but there is one source of ventilation, to which Mr. Hartley draws attention, which has not hitherto been sufficiently noticed. It is due to the passage of air through the walls themselves, and this has been shown to take place even when these walls are constructed of brick or stone, and plastered and papered. Pettenkofer found that an ordinary room in his house, with a German stove, and not an open English fire-place, the walls being brick, and the capacity about 2,650 cubic feet, had its entire contents changed once in an hour, when the difference between the inside and outside temperature was 34˚, the doors and windows being closely shut. When a fire was lighted in the stove the change rose to 3,320 cubic feet per hour. Although all openings and crevices in doors and windows had been pasted up. But while the difference between the external and internal temperatures was lessened 7˚, the change fell to 780 cubic feet. Märker and Schultze instituted experiments to ascertain the value of different kinds of building materials in their ventilating properties. They found that with a difference of only 4˚ between the external and internal temperatures, sandstone allowed of the spontaneous passage of forty-seven cubic feet per hour, while the quantity which passed through quarried limestone was 6.5 feet; brick, 7.9 feet, and mud as much as 15.4 cubic feet. These facts are not only curious, they are important. They show the advantage which a house possesses when standing alone, and they are a new argument against crowded neighborhoods and “French flats.” “Practical experience,” says Mr. Hartley, “has yet to prove whether concrete is sufficiently porous to constitute the walls of healthy houses.” But it has proved that the slag produced in iron foundries, from not being in any degree porous, is in the highest degree unhealthy.

After what we have said of the proportion of carbonic acid which makes the air objectionable, it is worth while to note some experiments made by Dr. Angus Smith on the air in some public places in London. He found in the Court of Chancery at a height of three feet from the ground that the air contained no less than 20.3 parts of carbonic acid in 10,000. In the boxes of the Surrey Theatre at midnight the proportion was 21.8, in the dress circle at Haymarket 7.57, and in the pit of the Standard Theatre 32. In Covent Garden Theatre, near a ventilator, Mr. Hartley found 14.8 parts in 10,000, and in the lower gallery of Drury Lane 27 parts. This is amply sufficient to account for the headache and drowsiness which often attend a visit to the theatre. 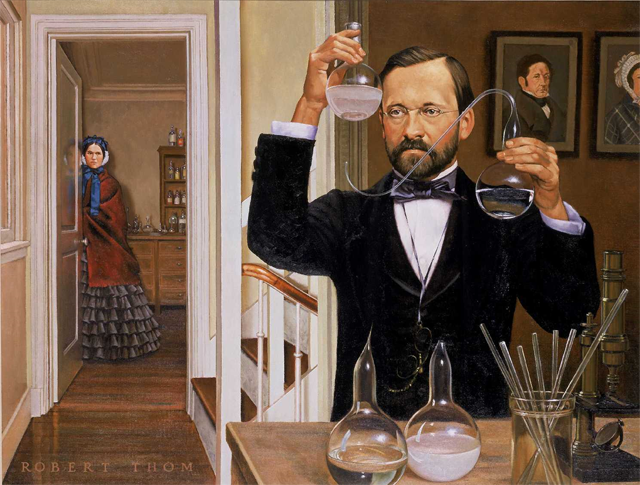 In the year 1662 Van Helmont wrote an essay telling how mice might be produced out of some sawdust and an old shirt. But he explains that such phenomena are to be attributed to the presence of a principle in the air or mass which makes it bring forth life. Mr. Harley notices that until 1859 no further advance beyond this theory had been made expect to establish it truth by experiment. It must be remarked that Mr. Hartley is not a believer in the doctrine or spontaneous generation, as laid down by Bastian and Pouchet. He is a disciple and an ardent admirer of Pasteur, and much of the two concluding chapters of the book is made up of an outline of Pasteur’s experiments, and a defense of his interferences from them. It is shown that fermentation and putrefaction are not brought about by air alone. Schroeder, in 1859, admitted that “fresh air contains an active substance which provokes the phenomena of alcoholic fermentation and putrefaction, a substance which heat destroys and cotton wool arrests.” The presence of oxygen does not, as was once supposed, alone bring about putrefaction, and it is upon the fact thus made known that depend most of the processes for preserving meat and other animal and vegetable products. Pasteur’s experiments showed that there are in ordinary air a variable number of organic bodies, varying from extreme smallness up to the diameters of .01 millimetre to .015 millimetre or more. These are not destroyed by the strongest sulphuric acid, but they are completely arrested when the air is drawn though a thickness of cotton wool. Among them are many which are capable of germination directly they are placed in circumstances suitable to the development of the lowest organisms; and where life, wither animal or vegetable, is produced in infusions which have been heated to the boiling point, the germs come incontestably from the surrounding atmosphere. Such at least are some of the conclusions derived from M. Pasteur’s very careful experiments, many of which Mr. Hartley has described with ample detail. They are extremely valuable just at the present time, when so much attention is being given to the subjects of evolution and the origin of life. Dr. Chartlon Bastian thought he had clearly demonstrated that a living unit may originate in a non-living but organizable fluid by the occurrence of certain new molecular combinations. But his experiments have always been regarded unsatisfactory and his arugment6s inadmissible, and Pasteur’s observations go to show that the truth is to be found in the very reverse of Dr. Bastian’s conclusion.

Some curious results have been arrived at as to the nature, not of visible, but of the invisible, particles that float in the atmosphere. In air examined during a tour in the midland district of England there were found, (1,) particles of vegetable tissue, exhibiting the pitted structure of fir wood, and probably consisting of unburned matter used in lighting fires; (2,) fragments of vegetation resembling in structure hay, straw, and grass seeds; (3,) hairs of plants and fibres resembling wax; (4,) cotton fibres, both white and colored; (5,) starch granules; (6,) wool, both white and colored; and, (7,) in greatest abundance, fungoid matter, spores and sporidia varying in size from the ten-thousandth to the fifty-thousandth of an inch in diameter. It was calculated that in the amount of air breathed by an average-sized man during a period of ten hours, there would be no less than thirty-seven and a half millions of spores visible under a magnifying power of sixteen hundred diameters.

It is worth while to note here the danger arising from the presence in the air of these organisms, and the use of them. Falling into water which has but a very minute portion of phosphates, ammonia, or nitrogenous organic matter, they rapidly increase, and if the water, under these circumstances, be used for drinking purposes, they give rise to diseases of the most deadly class, including cholera, dysentery, and typhoid fevers. On the other hand, if they did not exist, putrefaction and decay would be impossible. They constitute the “essence” described by Van Helmont, without which, as Pasteur has well said, “life would be impossible, because the return to earth and air of all that had ceased to live would be suddenly suspended.”

We have, however, said enough to indicate the nature of Mr. Hartley’s book, which must be regarded as a valuable addition to that class of literature which aims at presenting important scientific truths in a form which the general public will be likely to consider acceptable and to read. It is a work that cannot be too widely studied, and if the knowledge it conveys be steadily acted upon in the practical details of every-day life, we cannot doubt that it will help to promote the cause of sanitary progress.

Originally published in The New York Times on February 23, 1876