M. Louis Pasteur, an eminent French chemist, announces a triumph of science of great importance to mankind. It is a cure or antidote for hydrophobia. He has been studying and experimenting for four years and now confidently proclaims:

“From to-day anybody bitten by a mad dog has only to present himself at the laboratory of the Ecole Normale, and by inoculation I will make him completely insusceptible to the effects of hydrophobia, even if bitten subsequently by any number of mad dogs.” The plan of cure is similar to small pox preventative-vaccination.
M. Pasteur discovered first, in the course of his investigations, that the virus rabique loses strength by transmission through certain animals, and increases in intensity by transmission through other animals. His illustration is in these words, as cabled to the New York Herald: 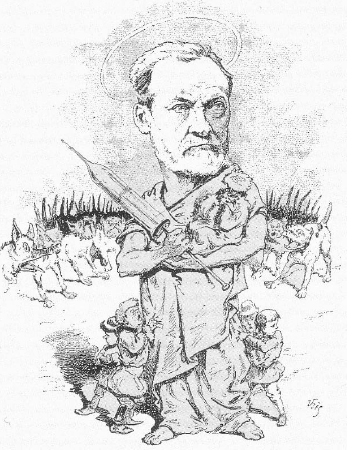 Pursuing his investigation, and multiplying proofs of the value of his discovery, M. Pasteur inoculated two dogs with equal amounts of virus taken from a dog which had died of acute rabies. One of these he left to its fate, and it went mad and died. The other he inoculated with his antidote virus. Complete cure resulted, and subsequent inoculation with acute virus proved harmless. Of many tests made not one failure resulted. Satisfied that he had made a genuine discovery, M. Pasteur gives it to the public without reserve, stating fully and plainly his processes of investigation and tests. While the similarity of this anti-hydrophobia treatment to that adopted in defense against small pox is striking, this difference is happily noticeable. Vaccination is resorted to guard against small pox. In case of hydrophobia the antidote is applied after the disease has become seated.
It remains for science to bring light an antidote, or cure, for diphtheria.