Epidemic Diseases: Fermentation, and the Germ Theory of Disease

Lecture by Prof. Chandler, of The Board of Health

A lecture on “Fermentation, and the Germ Theory of Disease,” was delivered at the Stevens Institute, Hoboken, a few days ago, by Dr. Charles F. Chandler, of the School of Mines, Columbia College, and President of the Board of Health of this City. This was one of a series of lectures being delivered there by distinguished men in various departments of science, with a view of popularizing science. The subject of the lecture, though necessarily technical in its details, is one of great importance, as involving the true solution of the problem of epidemic diseases, and of the cause of decay in animal and vegetable substances. The lecturer began by stating that decay in animal and vegetable substances is due to one of two causes — fermentation or putrefaction.
In illustration of the idea of fermentation, the lecturer stated that if animal or vegetable substances are left to themselves in a moist condition at ordinary temperature, they undergo a peculiar change or decomposition, and new products are the result. Grape-juice, under these conditions, yields alcohol and carbonic acid. Milk sours and decomposes into sugar and lactic acid. Oils and fats become rancid. Bitter almonds moistened with a little water and left to stand over night are found to be decomposed into prussic acid and the oil of bitter almonds. The nature of the change which has gone on in these substances may be known by their odor. When fermentation has taken place the odor is inoffensive; when putrefaction has taken place the odor is offensive. There are various kinds of fermentation: vinous, lactic, butyric, mucous, acetic, saccharic, glyceric. The characteristics of several of the forms of fermentation were given. In vinous fermentation the stages in the change are as follows:

This sediment is yeast, and possesses the property of exciting fermentation again when introduced into other liquids. The changes produced when other kinds of fermentation take place were given at length. The process of putrefaction was next enlarged upon. Putrefaction is the fermentation of any highly-nitrogenized animal or vegetable substance. Any highly-nitrogenized animal or vegetable substance exposed to the air will soon become turbid. This turbidity is due to the presence of innumerable bacterian cells. These cells are the one eight-thousandth of an inch in diameter and the one forty-thousandth of an inch in length, and may be seen to be moving in every direction. These bacteria cells continue to multiply as long as the putrefaction goes on. Finally the liquid becomes clear, and a layer of the bacteria may be seen at the bottom. These bacteria have this quality, that the smallest quantity of them put into an albuminous solution will induce putrefaction again and a new development. These bacteria are a vegetable of which many genera and species are known to exist. Bacteria were first considered incidental to putrefaction, but are now considered by scientists to be the essential and immediate cause of putrefaction. The discussion of the subject of bacteria and putrefaction among scientists involved the question of spontaneous generation. The Greeks believed in spontaneous generation, and divided all animals into two classes: first, those who life was transmitted to them from a parent; second, those which originated, spontaneously as they supposed, in the mud, slum, &c. This class embraced all shell-fish and many insects. Less than three centuries ago the belief of spontaneous generation was almost universal in Eurpoe. The growth of this belief was traced, and the various experiments detailed by which it was sought to prove or disprove the theory. The analogy between fermentation and infectious diseases was next shown. The following features are found to be common to both: both fermentation and infectious diseases are developed by exposure to some contagion; they are both attended by a regular succession of symptoms; they both have definite periods of duration; and, lastly, they both have the quality of reproducing themselves. An examination into these analogies has led to the germ theory of disease. This refers the origin and propagation of disease to independent germs. The class of diseases produced in this way are called zymotic.

The various forms of fungi were next taken up. Mold, mildew, and smut were pronounced to be forms of vegetable fungi. The contrast between these and higher orders of plants was shown. The lecturer then explained how the fruit, or spores of these fungi, when carried to a congenial soil, take root, and grow and bear fruit. It was stated that fungi are disseminated in two ways — by contact, and by spores carried through the air. The analogy was traced between the propagation of these fungi and the introduction and growth of parasitic worms into the human system. Parasitic insects lodge upon the cuticle, burrow into it, deposit their eggs, and breed. The lecturer showed how these animals are introduced into the system by being taken in the food. Illustrations of trichinis spiralis and other worms were thrown upon the screen by means of the magic lantern. Dr. Chandler stated that these animals may always be destroyed by thoroughly cooking the meat. The potato-rot in this country a few years since, by which seven-eighths of the entire crop was destroyed, was pronounced to be due to a fungus, which first appeared on the leaves of the potato-plant; then its millions of spores were dropped to the soil, and finally taken up by the potato itself. 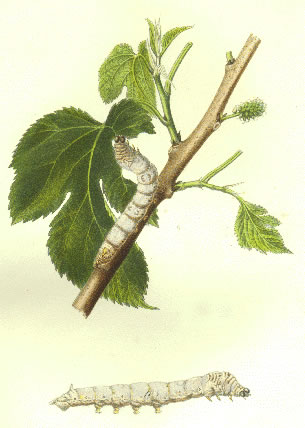 The silk-worm disease, which a few years ago destroyed nearly all the silk worms in France in 1853, was found to be due to the presence in the system of the worm of a vegetable parasite which drew its sustenance from the body of the worm itself, and increased in size till its death followed. These parasites are called muscadini. Magnified pictures of the silk worm affected by it were thrown upon the screen, and excited a great deal of interest. The ravages of this disease continued over a period of twelve years, and the annual production of silk, which in 1853 had been 20,000,000 kilogrammes, was reduced to 5,000,000 kilogrammes in 1865. And the consequent loss to France has been estimated at $250,000,000. Corn smut, wheat smut, and a disease which affects the common house-fly, were also pronounced to be of the same nature — vegetable parasite. The lecturer then enumerated several diseases of the same nature which affect the human organism, and showed how they have been proved to be such. In 1839 Schönbein discovered fungoid vegetation in favus (scald head.) In 1841 Gruby described the mycelium and spores which are characteristic of this disease, and called the plant Achorion Schönbinii. In 1844 Gruby discovered microscopic vegetation on the skin in a case of porrige-decalaruus, and called the plant Tricophyton tonsurans. The same plant is seen constantly in Tinea sycosis, (barber’s itch) and in Tinea circinnata, (ring worm.) In 1846 Lichstedt discovered the microsporon furfur in Tinea vessicolor. The proof that these diseases are due to parasitic germs is, first, that they are reproduced by inoculation. Many interesting cases were cited to show that they are so reproduced. Second, the diseases are cured by destroying the fungus. It was mentioned as remarkable evidence of the progress which has been made of late years in the treatment of disease, and in microscopical science, that Lenman(sp) collected some of the spores of the favus from the air near a patient affected with the disease. The burden of the lecture was to show that all epidemic diseases, such as the small-pox, diphtheria, and the cholera, were propagated by parasitic germs, and many statistics were produced to prove the theory. The lecture was brilliantly illustrated throughout by means of the magic lantern, and received with frequent interruptions of applause by the large and intelligent audience assembled to hear it.

Originally published in The New York Times on April 9, 1874