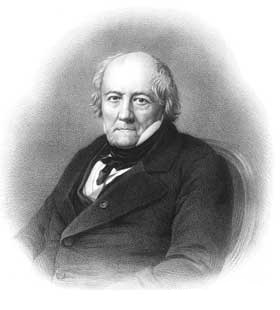 Born in 1774 in the capital city, Paris (Ile de France Province), to a family just recently lifted from poverty. His ancestors were peasant stock, mostly farmers in the Lorraine region. Fortunately his father had attained a position at the Treasury so he lived in relative comfort in those restless years before the Revolution. From an early age, Jean Baptiste exhibited an aptitude for Science and yet his father enrolled him in private lessons in Mathematics, hoping that one day his son would make his livelihood through commerce. Later he studied at the Collège Louis-le-Grand at a time when the political crisis could not be ignored. In 1793 he joined the Artillery in the Army of the North,and then briefly attended the École des Ponts et Chaussées in 1794. Meanwhile, Gaspard Monge and Lazare Carnot established the École Polytechnique, in order to rapidly train engineers and artillery which the universities could not provide at the time. From its inception this institution was known as the premiere school of Mathematics and Engineering. Biot joined the first class, and quickly rose to the rank of brigade chief.

Biot Makes his Mark in Mathematics

It was usual for the students of these Grandes Écoles to repel the plots and skirmishes of the revolution, mainly as a front line defense for the capital; Biot however, was swept up in the insurgency, which attempted to overthrow the Convention in 1795. He remained above suspicion and gradually let go of his involvement. During his two year term at the Polytechnique, he came under the influence of Pierre-Simon Laplace. Biot was maturing quickly as a mathematician. He believed he had solved a problem left by Euler, so he submitted it to Laplace. Arrangements were made by Laplace for Biot to present this original method to a group of peers at the Academy. Among these peers were Lagrange and General Bonaparte, as well as Monge who looked favorably upon his former pupil. Biot later recounted that among these towering intellects, Lagrange was the most skeptical and intimidating. Calmly he delivered his solution and won their approval and respect. Later that evening Biot was invited by Laplace to his private study. From his closet he retrieved a stack of papers, yellow with age, and laid them before his student. Biot was astonished at what he saw: the exact proof of which he thought himself to be the originator. It seems that Laplace had devised the same method years earlier, but was unable to carry it through to the end. He smiled warmly at his young friend and bound him never to reveal what he had been shown.

After graduating in 1797, Biot was appointed to Beauvais where there was need of a Professor of Mathematics. These were fruitful years for Biot; he ripened his knowledge of Astronomy, Chemistry, Optics, Acoustics, Electricity, Magnetism, Higher Mathematics and History. Within a few years, Laplace had secured him a chair at the Collège de France. It was at this time, around the year 1800, that Laplace was preparing to publich his ‘Mécanique Celeste’. Biot was very much a student of Astronomy and requested to be allowed to examine the proof sheets. His motives seemed genuine and disinterested, but Laplace resisted. It was only after another request that he convinced his mentor that a final proof reading by someone knowledgeable in Astronomy would likely detect errors which would evade the editors. Biot turned out to be correct. He found a matter which needed reworking.

A Man of Many Talents

Throughout this period from his residence at the Collège, Biot published a wide variety of articles and books, all under the general heading of Physics. The first two decades of the century were his most active.He journeyed to the north to report on meteorites and swayed the scientific community to accept the fact that rocks fall from the sky, and he accompanied Gay-Lussac in 1804 on his famous ballon ride. In 1806 Biot was collaborating with Dominique-François Arago on the study of gases. Together they created an instrument called the Fortuna Apparatus, which measures the density of gases. This in particular paved the way for the experiments of JB Dumas. In 1814 he is made Chevalier du légion d’honneur. From 1810 to 1820 he published essays and text books on Refraction, Polarization, Astronomical Physics and quite a few biographies of eminent men such as Leibniz and Franklin. Also in this period, he brings forth the first biography of Sir Isaac Newton. Biot emphasizes that Newton suffered a mental breakdown, after which, no further scientific work was done. The biography was seen as less than flattering and stirred up controversy in England.

Biot is also remembered for his geodetic survey beginning in 1806, to measure the arc of the meridian, which ultimately established the new unit of measure, the meter. He was deployed with Arago to Spain and the Baleric Islands. Later in 1817 he was invited to the British Isles to complete the geodetic survey for that country. He is also remembered for the Biot-Savart Law, which he laid down in 1820 with his assistant Félix Savart. They found that the magnetic field created by an electric current becomes more intense by a constant ratio. Biot had numerous honors in recognition of his work. He was elected to the Académie des Sciences in 1803, and to the Académie des Belles-Lettres in 1841 and again to the Académie Française in 1856. It is important to remember that the life long membership of the Academicians is fixed to a select few; therefore Biot enjoyed a unique celebrity. Other honors and memberships include: the aforementioned Legion of Honor, The Bureau of Longitudes, his life long chair at the Collège de France and England awarded him the Rumford Medal of the Royal Society.

At the turn of the century, Laplace was collaborating with Claude Louis Berthollet, a fellow student of Lavoisier. As representatives of the École Polytechnique, the two accompanied Napoleon to Egypt. Upon their return, they organized a private salon to discuss the ongoing revolution in Physics and Chemistry. The meetings were informal at first but in a few years, the group became recognized as the elite scientists in France. The group became established sometime between 1802 and 1805 calling themselves the Société d’Arcueil, named after the upscale neighborhood where Laplace and Berthollet lived, in adjoining houses. The founding group, including Jean-Antoine Chaptal and Alexander von Humboldt, each sponsored their own protégés; thus, Biot and Arago were brought in by Laplace. Other members from this second generation include: Thénard, Gay-Lussac, Malus and Poisson. These in turn recruited Fresnel, Fourier, Ampére, Mitscherlich, Libig and JB Dumas. When scanning this panorama of names it must be emphasized that Louis Pasteur is a descendant of this remarkable lineage, all the way back to Lavoisier; Biot being his most direct link. Biot devoted many years to recording the biographies of his associates, focusing on the spirit in which scientific discoveries are made. That spirit indeed gave Pasteur the perseverance when he suffered so many losses in his personal life.

The first time Biot had ever heard of Louis Pasteur was in 1848 during one of the usual talks amongst the Academicians. Balard brought the news of Pasteur’s experiment; Biot was curious about this research because he had campaigned for the application of Optical Physics to Chemistry, but for far too long he was unheeded. Pasteur was well aware of Biot’s ground breaking work on the optical rotary affect of organic molecules. Biot invented an instrument called a polarimeter, which directs a ray of polarized light through chemical solutions. He found that certain molecules were active and others inactive as far as rotating the beam of light. Water and alcohol are neutral towards light but many organic compounds, oils and especially sugars, are active. The polarimeter was used to analyze how much sugar was contained in various mixtures and hence it is sometimes referred to as a saccharimeter. Biot found that the more concentrated solutions have a greater degree of rotation. Pasteur utilized this instrument and the working hypothesis that it was the symmetry of the molecules which caused this rotation, to solve a problem that had eluded Biot and others for decades. He wrote to Biot, who he did not know at that time, asking him for an interview to discuss his recent experiment. Biot arranged to repeat the experiment at his laboratory and he supervised every step. Once the experiment had been carried out to his satisfaction, Biot exclaimed, “My boy, I have loved science so much during my life, that this touches my very heart!” By this time Biot, in his seventies, was known to be rather misanthropic and overly critical. To be praised by him was rare; his diatribes were more common. But Pasteur never knew that side of him, because from that moment on, he had awakened in the old Biot, a joyful heart, eager to see his life’s work carried to its completion by the young savant.

The two corresponded regularly. Biot would say, “You can depend on my wish to serve you in every circumstance”, and Pasteur would say, “You will always find me anxious to second you in your labors.” From then on, Biot was the main sponsor of Pasteur; all of his mémoires submitted to the Institute were dedicated to Biot, who read them aloud during the meetings of the Académie des Science. With Biot promoting you, all the scientific world would hear about your work, which is indeed how Pasteur came to be known throughout France and Germany. Like Balard, Biot had always desired to have Pasteur rewarded with a seat at the Académie, even though he advised his young friend to wait for a more suitable opening when the first opportunity arose. This may have been a mistake but Pasteur followed this advice and consequently he was not seated at the Académie until after Biot’s death.

Biot invited Pasteur to elite meetings, very much like Laplace had done for him, where Pasteur conversed with Dumas, Thénard, Pelouze, Regnault, and even Mitscherlich. Evidently Biot was kindly disposed toward young men who shared his interests. Biot had become close to the Pasteurs; he was the godfather of their son, who was named Jean-Baptiste. He once met with the elder Pasteur, a fellow Legionnaire. We can imagine the two veterans exchanging stories about the Revolution and the Napoleonic Wars.

The Life of Biot

Old Biot had lived through all the political régimes. He was considered to be last of an heroic age. He arose from an exceptional circumstance, an intense mobilization organized by Monge and Carnot. He remembered first hand the sacrifices made by young men, and the character of those comrades who fought as much for political freedom as for well-being through scientific progress.

Born in the city of Mézières (Champagn-Ardennes Province) adjacent to Belgium. The family traces back …