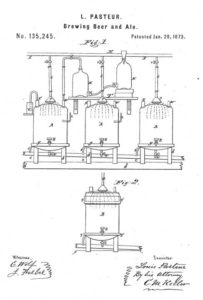 In a simple experiment of drawing through an aspirator a current of outside air through a tube containing a little plug of cotton wool, Pasteur demonstrated that, as the current passed it deposited on this sort of filter some of the solid corpuscles contained in the air. After a year’s study, Pasteur reached this conclusion : “Gases, fluids, electricity, magnetism, ozone, things known or things occult, there is nothing in the air that is conditional to life, except the germs that it carries.” Pasteur was convinced that the atmosphere itself contained nothing which could produce life, but in fact life did exist within it.

With a simple, yet insightful application of this discovery and the ground breaking science in Germ Theory of Disease and his Studies on Fermentation, Louis Pasteur revolutionized beer and wine making processes. He posited that the exposure of beer and wine to the open atmosphere would contaminate the substance, due to the living organisms in the air, responsible for the processes of fermentation. Therefore, in order to effectively protect a substance from infection, not only must it be properly heated to eliminate or “pasteurize” any living organisms already within the substance, but during and after the heating takes place, the substance must remain closed off from any atmospheric influences.

Previously, the wort was boiled and then exposed to the air for cooling, before the yeast was introduced to catalyze fermentation. Pasteur later developed and patented a device that would allow for the proper brewing of beer, always ensuring the wort stayed protected from outside influences, right up to the point of distribution. In Pasteur’s process, the wort is kept in closed vessels and cooled by spraying the outside of the vessel with water. A special yeast was introduced into the mash after it cooled, thus preventing contamination of the wort with stray wild yeasts floating through the air.

This review was originally published in the Pharmaceutical Journal and Transactions, November 17, 1877, pp. …