Louis Pasteur Changed Medicine, but was Not a Physician 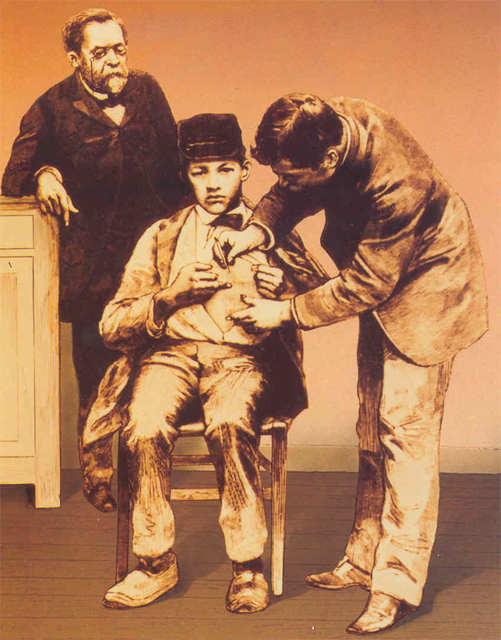 By 1877 Louis Pasteur was coming to realize that he could no longer stand by and make scientific arguments regarding the research conducted on infectious disease. As a scientist he himself had to demonstrate the pathogenic role of the microbe through physical experimentation. Pasteur had so far proven that the absence of germs prevented disease (asepsis and antisepsis), but not that the germs themselves were the cause for the disease.

In his earlier investigation of the silk worm disease, Pasteur found evidence for possible transmission of an infection, but never clearly identified whether the bacteria was the cause of death. It was now more important than ever that a direct and definitive demonstration be given proving the relationship between the bacterium and the cause of death. Pasteur’s career was now moving away from the chemistry of fermentation and his work on the anthrax disease began a shift towards experimentation in the medical field. This new generation of experiments required living test subjects and led scientists to use animals as the test objects, with bacteria as the focus and disease as the general theme for his studies.

Louis Pasteur’s investigations and experimentation in the medical field did not come without resistance and opposition from the medical community. After studies involving animals or humans called for titles or diplomas that Pasteur did not have. Academically, Louis Pasteur was a chemist, and although he had been elected to the Académie de médecine, did not mean he was accepted as a physician by his peers. When the medical community invited a chemist to present ideas or become involved in a medical discussion, it was to allow him to discuss related research and compare his experiments with colleagues. This was mainly due tothe existence of two opposing groups regarding the link between fermentation and contagious disease. The majority attributed the phenomena of fermentation, putrefaction and infection as a chemical force causing the destruction, decomposition, or disarrangement of matter. Others believed that the process is caused by an external, living organism, referred to as the contagium vivum, which attacks and destroys the tissues of the host it has infected.

This debate brought back memories for Pasteur, as it was the same presumptions behind the theory of Spontaneous Generation he earlier disproved in the 1860s. Rather than debate the existing facts, Pasteur’s approach was different. He used indisputable experiments as ammunition for injecting new ideas into the medical field and forcing the medical community to change their beliefs. In fact, Pasteur would become so involved and influential in the field of infectious disease, that he would give bold advice and eventually monopolize the debate on how to medically treat patients.

Pasteur would eventually develop his microbial theory that would establish the correlation between fermentation and contagious disease. On December 10, 1878, at the Académie de médecine, Jean-Baptiste Bouillaud, the man who first described rheumatic fever declared,

Before M. Pasteur’s discovery, physicians knew that in contagious, miasmatic, and zygomatic diseases there was something that fundamentally differentiated them from other illnesses. This something they called contagium, miasma, or virus, and they admitted its existence – without ever seeing it, but with complete and absolute certainty – on the basis of their observations. The great revolution achieved in pathology through the discovery of M. Pasteur is that this eminent scientist has allowed us to touch it with our fingers, or rather see it with our eyes through the lens of the microscope, this quid divinum that before him we assumed to exist without ever seeing it.