Philadelphia Water Troubles at an End 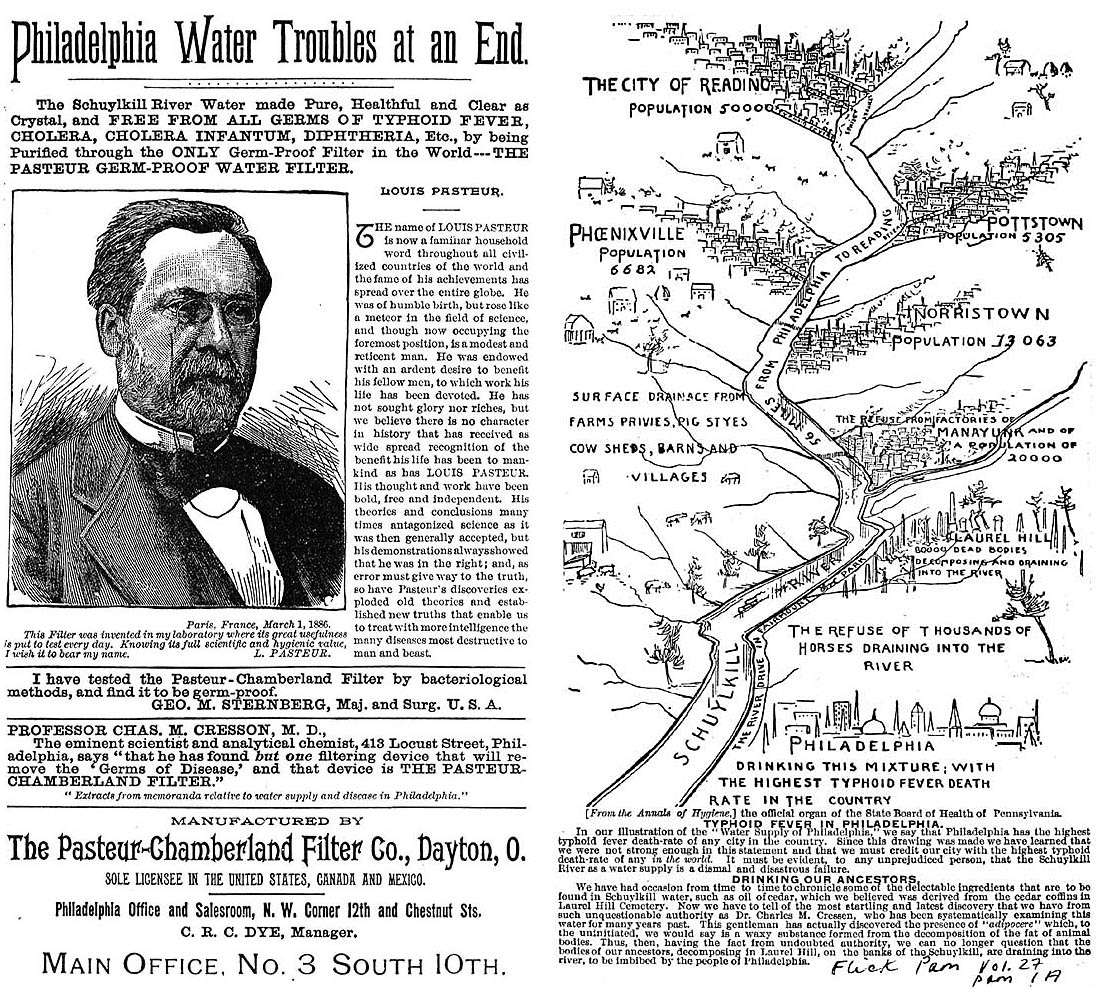 The Schuylkill River Water made Pure, Healthful and Clear as Crystal, and FREE FROM ALL GERMS OF TYPHOID FEVER, CHOLERA, CHOLERA INFANTUM, DIPTHERIA, Etc., by being Purified through the ONLY Germ-Proof Filter in the World — THE PASTEUR GERM-PROOF WATER FILTER

The name of Louis Pasteur is now a familiar household word throughout all civilized countries of the world and the fame of his achievements has spread over the entire globe. He was of humble birth, but rose like meteor in the field of science, and though now occupying the foremost position, is a modest and reticent man. He was endowed with an ardent desire to benefit his fellow men, to which work his life has been devoted. He has not sought glory nor riches, but we believe there is no character in history that has received as wide spread recognition of the benefit his life has been to mankind as has LOUIS PASTEUR.

His thought and work have been bold, free and independent. His theories and conclusions many times antagonized science as it was then generally accepted, but his demonstrations always showed that he was in the right; and, as error must give way to the truth, so have Pasteur’s discoveries exploded old theories and established new truths that enable us to treat with more intelligence the many diseases most destructive to man and beast.

“I have tested the Pasteur-Chamberland Filter by bacteriological methods, and find it to be germ-proof.”

The eminent scientist and analytical chemist, 413 Locust Street, Philadelphia says “that he has found but one filtering device that will remove the ‘Germs of Disease,’ and that device is THE PASTEUR-CHAMBERLAND FILTER.”

In our illustration of the “Water Supply of Philadelphia,” we say that Philadelphia has the highest typhoid fever death-rate of any city in the country. Since this drawing was made we have learned that we were not strong enough in this statement and that we must credit our city with the highest typhoid death-rate in the world. It must be evident, to any unprejudiced person, that the Schuylkill River as a water supply is a dismal and disastrous failure.

We have had occcasion from time to time to chronicle some of the delectable ingredients that are to be found in Schuylkill water, such as oil of cedar, which we believed was derived from the cedar coffins in Laurel Hill Cemetary. Now we hve to tell of the most startling and latest discovery that we have from such unquestionable authority as Dr. Charles M. Cresson, who has been systematically examining this water for many years past. This gentleman has actually discovered the presence of “adipocere” which, to the uninitiated, we would say is a waxy substance formed from the decomposition of fat of animal bodies. Thus, then, having the fact from undoubted authority, we can no longer question that the bodies of our ancestors, decomposing in Laurel Hill, on the banks fo the Schuylkill, are draining into the river, to be imbibed by the people of Philadelphia.