To each gallon of cold water, put one pound common sugar, one-half ounce tartaric acid, one tablespoonful of yeast. Shake well, make in the evening, and it will be fit for use next day. Make in a keg a few gallons at a time, leaving a few quarts to make into next time, not using yeast again until keg needs rinsing. If it gets a little sour, make a little more into it, or put as much water with it as there is cider, and put it with the vinegar. If it is desired to bottle this cider by manufacturers of small drinks, you will proceed as follows: five gallons hot water, thirty pounds brown sugar, three quarters pound tartaric acid, twenty-five gallons cold water, three pints of hops or brewers’ yeast worked into paste with three quarters pound flour, and one pint water will be required in making this paste. Put all together in a barrel, which it will fill, and let it work twenty-four hours, the yeast running out at a bung all the time, by putting in a little occasionally to keep it full. Then bottle, putting in two or three broken raisins in each bottle, and it will nearly equal champagne. 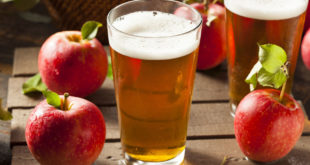 The apples, after being plucked, are left in heaps in the orchard for some time, …