How Pasteur Made Nursing Better

One of the most common occupations in health care is the registered nurse. Registered nurses provide a wide variety of services to patients. They also work very closely with other medical professionals to diagnose patients and assist with treatment. Many of the discoveries of Louis Pasteur related to disease and germ theory revolutionized the nursing and surgical occupations.

It’s easy to forget how difficult life used to be. With today’s technology and innovation we’re focused on battling the more sophisticated diseases, genetic disorders, and symptoms of individual patients. During the 19th century, much of the science that dictates medical procedure today was unheard of. Disease outbreak of cholera, typhoid, and even plague could claim the lives of hundreds overnight. Nurses spent much of their time trying to make patients comfortable rather than administering actual treatment. As the development of bacteriology and microbiology improved, medicine did too. Louis Pasteur was at the forefront of this field. 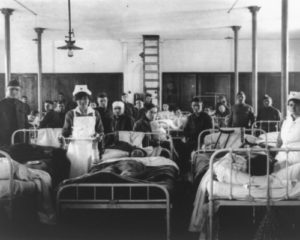 During the Franco-German War of 1870-71, Pasteur intervened on the procedures of military medical professionals. With his knowledge of germ theory and the way bacteria spreads, he insisted they implement sterilization and bacterial prevention methods. Before Pasteur, it was commonly believed the wounds should be left exposed to the open air to dry out. Pasteur discovered that not only did this not help, but made the situation much worse. The bacteria floating in the air would land on the open wounds, causing infection. Many of the infected wounds would get out of control, requiring limbs to be amputated and even causing death.
Ultimately the military leaders agreed to use Pasteur’s methods. The first layer of care was immediate first aid. Washing the wounds, removing dirty clothing from the wounded area created a clearner space for nurses and surgeons. The next step was to ensure that any medical instruments that would touch the wound were properly sanitized before use. It was common practice to use instruments that had been laying around or previously used on another patient without being cleaned. The final step, after aid or surgery was complete, was to cover the wounds with a clean cloth to ensure no bacteria could get into the wound. By covering the wounds and using sterilized medical instruments, Pasteur was able to significantly improve the survival rate of wounded soldiers. These techniques became standard in hospitals and still taught in registered nurse programs today.