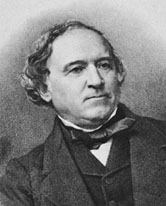 Jean Baptiste Dumas was born in the city of Alais (Languedoc-Roussillon Province) on the national holiday of July 14. This date would prove to be auspicious because his life would be intertwined with the fate of France, first as a revolutionary in science, later, as an eminent statesman. His father, a city clerk, would have sent him to serve in the Navy but with the chaos amidst the downfall of the First Empire he wished to spare his son from the bloodshed and instead apprenticed him to an apothecary. But at sixteen, Dumas intended to leave his home, so his parents accompanied him to Geneva where arrangements had been made for him to stay with relatives. He entered the university to study Chemistry, Botany and Medicine. There, he became fascinated with experiments and began experimenting on his own. His trade permitted him employment at the pharmacy where he used the instruments for his own curiosities. At only twenty, he devised a method to measure the volume of atoms through their specific gravity. This was certainly ahead of its time but lacked completion. One of his professors brought him a problem: what is the medicinal agent in burnt sponge which relieves goitre (a swelling of the thyroid)? Dumas analyzed the sponge and determined that it was specifically iodine which reduced the swelling. This insight was astounding and gained him the notice of Pierre Prévost, the physicist recently returned from Scotland. Together they explored animal physiology. Their findings were circulated under both names. Later, in 1822, Alexander von Humboldt, an associate member of the Academie de Sciences, came to Geneva and sought the young Dumas. Humboldt recommended him to Paris, the center of the scientific world, to cultivate his talents in Chemistry and Physics.

In 1823, he was given a position at the Athenæum and quickly earned the appointment of répétiteur of Chemistry at the École Polytechnique. Because of his reputation, he was furtively watched by the leading figures of the Academie de Sciences: La Place, Berthollet, Vauguelin, Gay-Lussac, Arago, and Poisson. There he experimented intensely, furthering the work that began in Geneva. In 1826 he published his atomic theories, laying down his method of determining atomic weights by vapor density. His work was followed enthusiastically, especially when he criticized the doctrines of Berzelius. In 1829 he co-founded the École Centrale de arts et manufactures, a foundation which gave prosperity to the French economy. Being Professor of Chemistry at the new school, he was offered the same position at the Sorbonne, succeeding Gay-Lussac in 1832, the same year he was elected to the Academie des Sciences.

Between 1833 and 1839 he investigated metalepsis, or substitution. He showed that molecules can be substituted in metal oxides. In gases he found that chlorine molecules could be substituted for hydrogen. The significance of this was that an electro-positive element was being replaced by an electro-negative one. He also noted the action of chlorine on acetic acid, which forms trichloroacetic acid. He introduced a way of estimating the amount of nitrogen in an organic compound and created an apparatus which he used to measure the changes of nitrogen and oxygen in his classrooms, before and after his lectures. He also recalculated the atomic weights of some 30 elements.

Dumas’ scientific career was cut short by the revolution of 1848. At the time, men of science were trusted to govern the state, and the citizens of Valenciennes elected him to the National Assembly. The President of the Republic nominated him Minister of Commerce and Agriculture. When the monarchy was restored under Napoleon III, he was promoted to the Senate and became Vice President of the High Council of Education. The emperor deemed his knowledge indispensable for the revival of scientific achievements in France. He also chaired the Municipal Council of Paris between 1859 and 1870. When the Second Empire was overthrown by the war of 1870, the Senate was dissolved and Dumas’ political career dissolved as abruptly as it began. He was still perpetual secretary of the Academie des Sciences, but had no daily routine of official business. He passed the time by looking after the Facultés, and questioning his peers about the ongoing investigations in Chemistry. His health was waning so he took up residence in Cannes during the winter months.

During his tenure at the Sorbonne, Dumas would consistently draw a crowd of six or seven hundred students, according to Louis Pasteur, who would arrive early to get a good seat. Pasteur attended the École Normale, but would attend the lectures of JB Dumas purely out of love for science. He shared Dumas’ passion for understanding the infinitely small. Dumas certainly noticed the importance of Pasteur’s first discovery on the molecular dissymmetry of living processes. The two undoubtedly discussed the arrangement of elements in a molecule, or what could be called the molecular geometry, today known as stereochemistry.

His affection for Pasteur is apparent in their correspondences. Only once did he admonish his pupil, in 1852 when the young Normalian declined his offer to join the Academie des Sciences in the General Physics department. Pasteur was following the advice of Biot, his other beloved Polytechnician, because Biot believed it was preferable to wait for a vacancy in the Chemistry department. Dumas, in his ardent desire to have Pasteur with him, rebuked his disciple for questioning the judgment of the Institute. (The Institut de France is comprised of the five Academies). In this letter, he tells Pasteur that on his first day as Minister he proposed the Cross of the Legion of Honor for him. Pasteur took this reproach seriously, and ran for the seat, but lost the election to Delafosse. He would be elected 10 years later in the Mineralogy department.

The influence of Dumas on the life of Louis Pasteur is unmistakable. At the time of Dumas’ arrival in Paris, there were no laboratories. He petitioned the state to equip the Facultés with laboratories, knowing from his own experience the rewards of learning first hand. This would impact Pasteur, who, years later, argued for the same reforms at the École Normale, even publishing editorials in the paper, and appealing to the emperor himself. It was Dumas who welcomed him to the Academie des Science at the end of 1862 and encouraged Pasteur to lay aside his crystals, to concentrate instead on fermentation. In 1863 Dumas seized the opportunity to escort Pasteur to the emperor when he was summoned. Dumas was also in the middle of the debate between Pouchet, Joly and Musset on the one side, and Pasteur on the other in the ongoing controversy of spontaneous generation. In 1865, Dumas, acting as Minister of Commerce and Agriculture, appealed to Pasteur to drop all his work and concentrate his efforts toward solving the silk worm disease which was devastating the economy.

It is evident, that without Dumas, Pasteur would not have attained the admiration which his nation has for him. Were it not for his inspiring lectures, his recognition of the most valuable part of an hypothesis, his prodding, and at times his pleading for Pasteur to come to his aid; it is certain that Pasteur’s life would have taken a different path.

In 1889, an extremely ill Pasteur, attended a memorial for JB Dumas in the town of Alais (Alès) to see the raising of a statue for that city’s most famous progeny. Pasteur told the assembled that his master was “the tutelary spirit of a nation”, and he told them what he told everybody when speaking of Dumas: “he could set fire to the soul.”