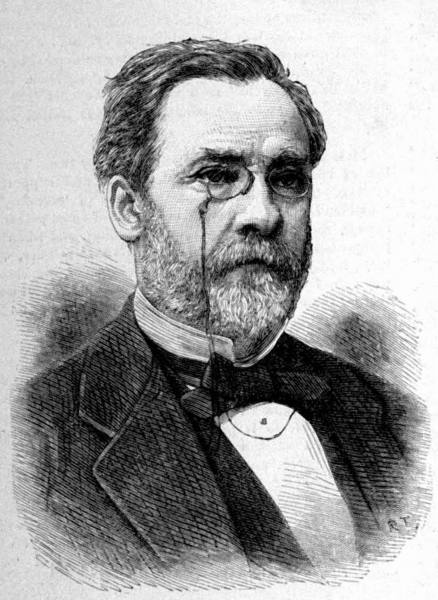 Originally published in the Journal of American Medical Association (JAMA) on October 5, 1895.

And the King said unto his servants, “Know ye not that there is a Prince and a great man fallen this day in Israel?”

LOUIS PASTEUR, the distinguished chemist, who has contributed so largely to the scientific standing of the French Academy, died of paralysis at his home in Paris September 28, in his seventy-third year.

For a period of half a century his researches and achievements have commanded the attention of the scientific world and his death will be viewed not as a loss to France alone, but as a universal calamity. His career is characterized by indomitable energy, and his successes have been due to his earnest application and strict adherence to a single line of research, easily traced from his first discovery, that relating to crystallography, to those of later days. LOUIS PASTEUR, like most scientists, was often assailed by unbelievers, but guided by mathematical precision and armed with the arguments supplied by careful research, he lived to see his important theories accepted by those who were formerly most active in their denunciation. So invincible did his theories prove that his colleagues became somewhat chary of taking exception to his statements, and on one occasion it is said that when a member of the Faculte de Médecine announced his intention of proving the fallacy of one of his arguments, a member of the Academy of Sciences called him aside, saying: “Beware! PASTEUR is always right.”

His discoveries were those of great principles, and hosts of scientific workers were given their cue by some general principle enunciated by him, which when followed into its legitimate ramifications, seemed almost to become a new creation. Thus TYNDALL followed, when he demonstrated the aerial currents of bacteria. Thus LISTER followed, when he formulated the antiseptic plans of wound treatment, and others have walked in the rays of the same radiant light when they went a step beyond LISTER, and created aseptic surgery.

The industry, the modesty, the perseverance, and scarcely less the intense patriotism of this wonderful man, must commend his memory to posterity, by whom he will be appreciated for these characteristics almost as much as for his science.

The editor of this JOURNAL, as he writes, recalls the appearance of PASTEUR as he appeared in 1890 in his laboratory, in the famous Institute erected during his lifetime as a perpetual monument to his greatness.

A man of delicate frame, advanced in years, wearing a skull cap, with well cut gray beard, plainly dressed and modest in his demeanor. A thoroughly pre-occupied student, was our thought, as we approached him. In the pleasant interview which followed, PASTEUR was informed that the first steamer built by the United States Government for the Quarantine Service was named the “LOUIS Pasteur.” He simply expressed his thanks and bowed politely. Continuing the conversation, he was told that the second steamer for the United States Quarantine Service was named the “Robert Koch.” He became animated and said with much fervor: “C’est bien fait.” He evidently had great admiration for his German contemporary; there was not a tinge of jealousy. “May I ask,” said PASTEUR, “what names you have
chosen for the remainder of your quarantine fleet, as I understand from you that there are three more contemplated?” “We shall honor our own countrymen next,” he was told. “The third and fourth vessels will be named respectively the WILLIAM H. Welch and the George M. Sternberg; the fifth is not yet named.” “Again, well done,” said Pasteur, with interest.

A hurried walk with the savant and a friend through the laboratory and the museum ended this visit which, to the editor, will always be a fragrant memory and one of the pleasurable events of a lifetime…

In 1887 the Institute Pasteur was built by public subscription and the average number of inoculations has been nearly one hundred a day. In 1892 the municipal council of Dole placed a commemorative tablet over the door of the house in which he was born.