In his famous experiment, Louis Pasteur used a special flask whose neck was shaped like an S or the neck of a swan, hence the name “Swan Neck Flask.” He put a nutrient rich broth in the flask, which he called the “infusion.” He then boiled the infusion killing any microorganisms which were already present. Then he allowed the infusion to sit.

Because of the shape of the flask, the infusion was exposed to air. However, dust particles and other things in the air never made it into the infusion. Because they were trapped in the curve of the Swan Neck Flask. No matter how long he allowed the flask to sit, microorganisms never appeared in the infusion. However, if he tipped the flask and allowed the things trapped in the neck to get into the infusion, then microorgranisms began to appear in the infusion and multiply rapidly. This demonstrates that microorganisms do not appear as a result of Spontaneous Generation. Instead, they are introduced into food through dust particles and other things that happen to land on the food. 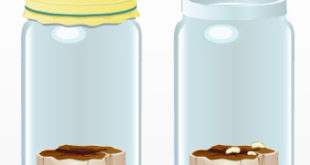 This simple Louis Pasteur experiment is perfect for teaching kids the basics of microbiology. The …