Why One of Pasteur’s Patients Died

The interest taken by the public in the cases of the Newark children who were bitten less than a week ago by a rabid dog has a pathetic no less than a scientific basis. The happy inspiration of Dr. O’Gorman, the attending Physician, to communicate by cable with the sole living that authority on the subject of hydrophobia, Professor Pasteur, of Paris, has been followed already by practical results of the most gratifying character. When the famous Frenchman cabled back his readiness to treat the little fellows and urged immediate steps to send them across the water the suggestion of expense immediately arose. Almost immediately, too, it was disposed of. A clothing merchant proffered outfits free of cost for the entire batch of patients; and an insurgent undertook to accompany them and watch for symptoms during the voyage and the public without solicitation, in Somers ranging from 10 cents to a hundred dollars, contributed to the fund, which is already swelled to the desired dimensions.
They have already sailed, and will reach their destination within three weeks of the time of inoculation by the virus, assuming, of course, that the dog was mad. An absurd superstition, one of many that seemed to imply of the impossibility of ever placing the human mind upon a wholly rational basis, caused the destruction of the dog before his real condition could be ascertained. There is, therefore, some doubt as to whether the children really are in danger of hydrophobia. However, as professor Pasteur himself expressed the logic of the case to a correspondent of the Herald, to treat them by his preventive method could do them no possible harm, while, providing they really were poisoned by the rabid virus it would, if applied in time, without doubt save their lives. 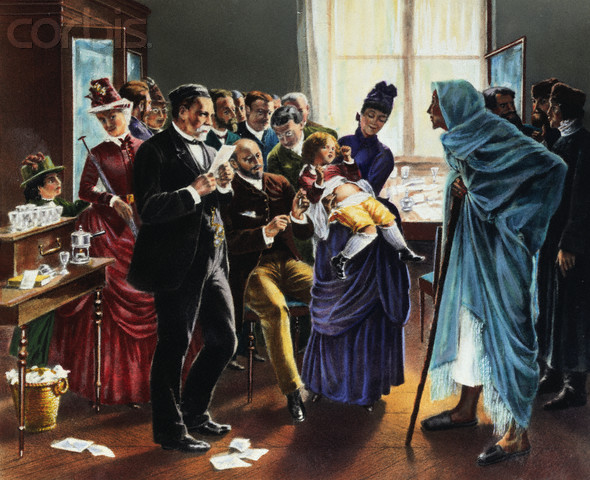 At this interesting juncture news is cabled that one of its distinguished Frenchman’s patients, a girl, has died of hydrophobia. Professor Pasteur and explained a circumstance by showing that she was inoculated according to his process too late, namely, 36 days after the bite down was inflicted. This is eligible and indirect accord with this theory, which is as simple as anything can be. Assuming two postulates, which are beyond the discussion at the present day, he proceeds in the line of his discovery. One of these is that hydrophobia in human beings is a distinct virus conveyed in the saliva of the dog to the human being; the other is that human system becomes ” tolerant” of poison by continual use of it. The former needs no demonstration, nor, indeed, does the latter to those who have given any attention to the subject of medicine. We have only, however, to cite the familiar experience of the tobacco smoker. The nausea, giddiness and misery consequent upon the first smoke betray the power of nicotine upon a virgin system. By slow degrees and constant repetition these effects disappear. What in the first instance was a virulent poison soon ceases to affect the system at all. Ten whiffs of a cigar caused nausea the first time. The confirmed smoker consumes ten cigars without any other effect upon him than a sense of placid enjoyment. So with the use of alcohol, of opium, of quinine, of drugs of all kinds. The system adapts itself to the new conditions and becomes ” tolerant” of the new order. Professor Pasteur gradually makes the system of his patient tolerant of the hydrophobia poison. Having ascertained that the virus can be weakened to an almost infinite degree he administers it by inoculation first in an almost imperceptible dose, which is gradually increased until the system is so thoroughly accustomed to the poison that in his own words the patient may be bitten by rabid dog with impunity, within a year.

Originally published in the Brooklyn Daily Eagle on December 12, 1885