Louis Pasteur was a French chemist and microbiologist. Despite his modest upbringing, Louis Pasteur would eventually become France’s leading scientific mind and later be known as one of history’s most prolific geniuses. Pasteur’s greatest discoveries resulted in what he termed, “The Germ Theory of Disease” and led to breakthroughs in the causes and preventions of disease, methods of preservation and sanitary production of food. His work opened the door to further discoveries in Microbiology, Bacteriology and Chemistry in general.

Louis Pasteur was born on December 27, 1822 in the tranquil town Dôle, in the Jura region of France to the family of a poor tanner. Pasteur’s early education was not in life sciences, but rather he gained degrees in Letters and Mathematical Sciences. Pasteur was a novice artist and painted a series of pastel portraits, now collected under the title Pasteur: Dessins et pastels. As a young man Pasteur’s father would share his experiences and opinions of the Napoleonic Wars. Later in life these shared memories would help Pasteur develop a great sense of pride and dedication to his homeland France.
Failing his first examination for the Bachelor of Science degree at Dijon, Pasteur continued his studies of special mathematics. A year later he would retake the entrance examination, ranking fourth place of all participants. While Pasteur had taken Chemistry courses, his grades were mediocre.Under the guidance of Antoine Jérôme Balard, as an undergraduate at the École Normale Supérieure, Pasteur embraced Chemistry more fully. Pasteur stays as Balard’s assistant for nearly two years.

In Balard’s laboratory, Louis Pasteur meets Auguste Laurent and begins to study crystallography, which would be the subject of his physics thesis titled, “A study of the phenomena related to the rotational polarization of liquids. Application of the rotational polarization of liquids to the resolution of several problems in chemistry” as well as the topic in his first report to the Academy of Sciences, “On the relation that can exist between crystalline form and chemical composition, and on the cause of rotational polarization.” From this point, Pasteur’s scientific and social activities accelerated quickly.
Over the next couple years, Pasteur would suffer both great tragedy and feel the surge of great success. Beginning in 1848, at the tender age of 26, Pasteur’s mother dies at Arbois. The same year, he is appointed professor of physics at Dijon, as well as acting professor of Chemistry at Strasbourg University and submits his second report on molecular dissymmetry to the Académie des sciences. Shortly after, Louis Pasteur would marry Marie Laurent, daughter of the rector at Strasbourg University. The couple would eventually have five children, only two of which survived, the other three perishing from typhoid fever. (top)

Studies on Fermentation, by Louis Pasteur 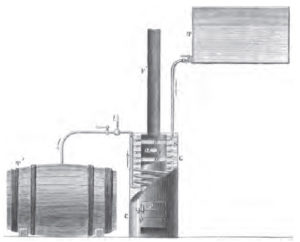 In 1856 Louis Pasteur is approached by M. Bigo, an industrialist from Lille, and asked to provide advice concerning the production of alcohol from beet root. This would be the beginning of Louis Pasteur’s work on fermentation. A year later Pasteur publishes a paper on lactic fermentation as well as a paper on alcoholic fermentation to the Académie des sciences. While vacationing in Arbois with his family, Pasteur examines diseased wines and observes the presence of germs analogous to those found in lactic fermentation. His research would lead him to the discovery of anaerobic (oxygen-deprived) life and gave him the insight to disprove the theory of Spontaneous Generation, for which he receives the Prix Alhumbert in 1862.
Pasteur goes on to publish numerous papers and give presentations on his new discovery, including his paper on atmospheric oxygen in vinification in 1863. He establishes a laboratory in Arbois dedicated to the studies of diseased wine the following year. In 1865 Louis Pasteur writes a paper on a practical process for preserving and improving wine presented to the Académie des sciences. This is the beginning of “pasteurization.” Pasteur and his associates would develop hundreds of new devices and apparatus to assist in the pasteurizing of wine by heat. (top) 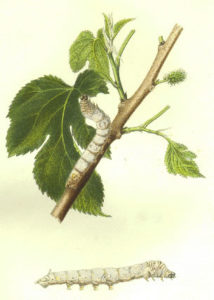 During the late 19th century France was a major producer of silk, which generated a significant sum of national revenue. In 1865 the industry was ailing and suffering great losses from a disease that had struck the silkworms, either killing them or disabling their silk production capacity. The worms appeared with small dark spots, and so the infection was called “pebrine,” the local name for pepper.
Louis Pasteur initially suggested destroying all infected silkworms in hopes that the disease they carried would too be annihilated. Some carried out this process to no avail. Pasteur later found that the offspring of a healthy generation of silkworms still carried the disease. The symptoms of the disease were not necessarily visible to the naked eye. He found dying worms that did not have the infectious globules and living worms that did.
After three years of studies and investigation, Pasteur and his team finally concluded that the problem wasn’t with one single disease but rather two: there was a microscopic organism living within some of the worms and a separate microbe within the globules. These living microbes could multiply, spread and infect living organisms, regardless of genetic heritage. He also found that healthy worms would become infected if they ate the droppings on a leaf from an infected worm. The disease termed flacherie would pass through and infect the intestines of the silkworm and is technically a form of lethal diarrhea.
Once the pathogen of the microbes had been identified, Pasteur and his colleagues were able to accurately remove all infected silkworms, leaving the remaining healthy worms to begin a new round of production. Louis Pasteur received national recognition for his efforts, as well as a hefty reward. (top)

Louis Pasteur and the Germ Theory of Disease

Louis Pasteur discovered what he termed the “Germ Theory of Disease” and what is also referred to as the Pathogenic Theory of Medicine. The basic theory proposed that microscopic organisms were the root cause of many diseases and through identifying these pathogens one could counter and/or prevent the effects of the disease. The controversy around Pasteur and this theory were very intense due to new scientific doctrines, the overturning of old methods and the fact that Pasteur was not a licensed physician. Regardless, Pasteur’s methods and discoveries would become the cornerstone of modern hygienic and other medical procedures.

LOUIS PASTEUR AND THE Anthrax Vaccine

In 1876-77 an outbreak of anthrax threatened France’s livestock, especially cattle and sheep. Robert Koch had already identified the cause to be the anthrax bacillus, a rod-shaped microbe. It was argued that the microbe itself was not the cause, but rather a toxic substance associated with it. Louis Pasteur disproved this theory and verified that it was the microbe itself that was causing the disease. Through his studies, Pasteur developed the theory of attenuation or the ability to stretch the potency of a microbe so thin that you would render it weak enough to be overwhelmed by the natural actions of the immune system, giving the host a certain invulnerability to the disease, now known as “inoculation.”Pasteur began by testing two groups of sheep, one who received the anthrax inoculation and the other who didn’t. Once introduced to the disease, the group that received the inoculation survived while the second group quickly died. The attenuated disease was distributed across the country and livestock was inoculated en masse. The result was a complete arrest of the anthrax epidemic and future immunity to its effects. Pasteur would later use this same method to conquer rabies.

After seeing numerous soldiers returning wounded from the Franco-German War in 1870-71, Louis Pasteur urged the military medical corps to adopt his method of sterilization and bacterial prevention when treating the wounded. The corps eventually agreed and began heating all medical instruments according to Pasteur’s specifications and covering open wounds with bandages. The results were incredible. The rate of death during surgery dropped remarkably and the need for follow-up surgeries to remove infection drastically decreased as well. 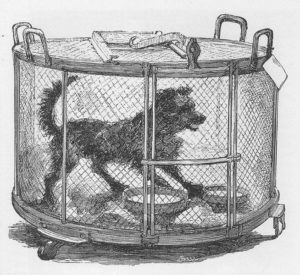 Louis Pasteur, with long time associate Emile Roux, used the Germ Theory of Disease to identify the pathogen of the rabies virus and the attenuation method to develop an effective vaccine. They would first remove the virus from an infected animal, usually a dog and proceed to grow it further in rabbits or horses. Once the virus had reached a certain potency, they would achieve attenuation through drying the nerve tissue of the affected area. Being a passionate scientist, Pasteur was known to be deeply embedded in his work and often took few precautions to protect his own safety. In The Story of San Michelle, author Axel Munthe relates:

Pasteur himself was absolutely fearless. Anxious to secure a sample of saliva straight from the jaws of a rabid dog, I once saw him with the glass tube held between his lips draw a few drops of the deadly saliva from the mouth of a rabid bull-dog, held on the table by two assistants, their hands protected by leather gloves.

The first rabies vaccine was tested on a human subject in 1885. The parents of Joseph Meister, a boy badly mauled by a rabid dog, pleaded with Pasteur to attempt the procedure, to which Pasteur reluctantly submitted. He was taken immediately to Pasteur’s laboratory where he received the vaccination. Meister survived the attack and eventually became the caretaker of the Pasteur Institute until Nazi occupation in 1940. Following this, Pasteur began mass production of the vaccine and was accepting patients in his laboratory full-time.
Rabies is referred to as “hydrophobia” or “fear of water” because of the symptoms displayed by the rabid animal. Because rabies causes inflammation of the throat and severe pain on the gum line, the drinking of water can be extremely painful and causes animals not to drink. (top) 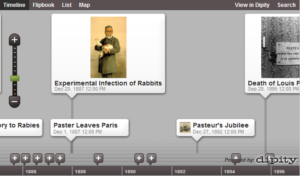 Sometimes you just need the facts. For a more condensed version of events and publications in the life of Pasteur, please refer you to the Louis Pasteur Timeline. This page offers both an interactive timeline and easy to follow text version of straightforward facts. This timeline condenses over 300 pages of biographical notes from arguably the most informative Louis Pasteur biography, written by Patrice Debré. Learn about personal events, scientific writings, interactions with colleagues, travel itineraries, and more!
Great for students. We have found this to be a great resource for students who are trying to build a basic understanding of Pasteur’s scientific progression. We believe this is one of the most complete timelines that details the life and work of Louis Pasteur available for free on the internet.
This article was originally published on December 21, 2010.

His Life and Labours by René Vallery-Radot, 1885
Louis Pasteur: A Biography in the Journal of Pathology and Bacteriology by German Sims Woodhead, M.D., 1896
Louis Pasteur by Albert Keim, Louis Lumet and Frederic Taber Cooper, 1914

The Life of Pasteur by René Vallery-Radot, 1915
The History of A Mind by Emile Duclaux, 1920
Knight of the Laboratory by Francis E. Benz, 1938
Loius Pasteur: Free Lance of Science by Rene and Jean Dubos, 1950
The Life and Times of Louis Pasteur by David V. Cohn, 1996
If you need writing tips and sample academic papers find them at PapersMart – blog supported by experts. 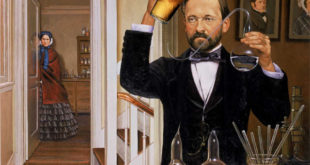