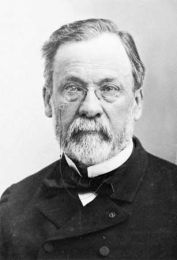 Originally published by the U.S. National Library of Medicine for an exhibit in observance of the sesquicentennial of the birth of Louis Pasteur.

On December 27, 1822, Louis Pasteur, son of a tanner and former sergeant in the armies of Napoleon, was born in obscurity at Dôle, France. Today his name is known and honored throughout the world for his contributions to the welfare of humanity. A great scientist above all a great experimentalist, he was also a crusader who became the nineteenth century’s greatest symbol of triumphant science.

As a young student, Pasteur was noted chiefly for some pastel portraits of his parents and friends. At the École Normale Supérieure, he was fired with the joy of discovery under the guidance of two influential teachers, Jean Baptiste Dumas and Antoine Jérôme Balard. Trained as a chemist, Pasteur in his first research discovered why sodium-ammonium tartrate rotated the plane of a beam of polarized light while the corresponding paratartrate did not. This brought him the attention and support of the outstanding French physicist Jean Baptiste Biot. The work also demonstrated his independence of mind in questioning a leading scientist, his ability to select significant problems, and his experimental genius in dealing with them.

Pasteur moved from his studies of optical rotation to fermentation, where, in opposition to the commonly accepted views of the leading German chemist, Justus Liebig, he demonstrated convincingly the role of yeast in alcoholic fermentation and of other microorganisms in other forms of fermentation. The need to convince the skeptical led him to studies of so-called spontaneous generation. At the urgent request of others he studied the causes of “diseases” in wine and vinegar and also in silkworms. Always he went quickly to the essence and his solutions were practical and useful to the industries involved as well as fruitful for scientific theory. His experiments were designed to test, prove, and convince. He had to fight for his ideas to have them accepted, and did so ardently and effectively.

During the 1870’s Pasteur turned his attention to animal diseases and then to those affecting human beings. While others, notably Robert Koch and his coworkers, were more active in discovering specific bacteria that cause human diseases, Pasteur studied the mechanisms of infection and immunity. In 1879 he created a vaccine against chicken cholera, the first vaccine since Jenner’s discovery nearly a century before of vaccination for smallpox. In a few short years he also discovered vaccines against anthrax and swine erysipelas. In each case the method used to weaken the causative organism was different. Pasteur had turned the preparation of vaccines from an empirical discovery useful only against smallpox to a scientific process for creating new preventive inoculations.

In the midst of the France-Prussian War, Pasteur writes of his devotion to science and country.

Pasteur’s greatest popular triumph was the discovery of 1885 of a method for preventing the development of rabies in persons bitten by rabid dogs. Within a year hundreds had been treated, and the fame of Pasteur was carried throughout the world. The Pasteur Institute in Paris was founded by popular subscription to carry on this work. It lives on today as a leading research institution of France.

In honor of Pasteur and in commemoration of the 150th anniversary of his birth, the National Library of Medicine is exhibiting selected books and manuscripts from its collections illustrating the contributions of Pasteur to science and human welfare. Of particular interest are the many manuscripts in his own hand, representing drafts of papers, letters, speeches, and reports in his varied capacities as scientist and researcher, educational administrator, and patriot. 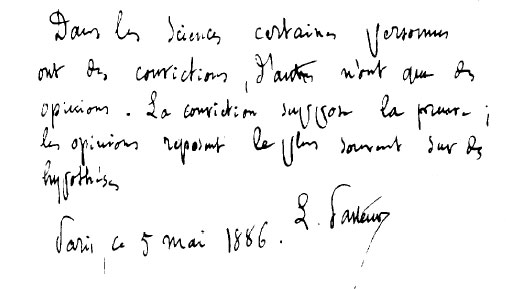 “In the sciences, certain persons have convictions, others have only opinions.
Conviction supposes proof; opinions generally rest upon hypotheses.”